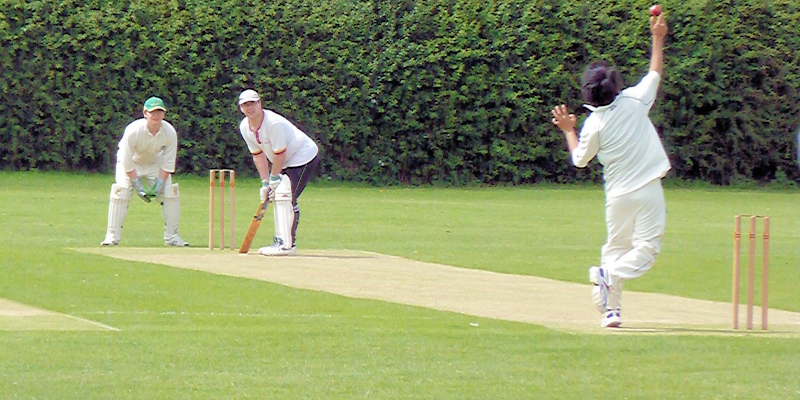 York's Department of Computer Science has a long history of involvement in cricket, both as a social activity and as an "industrial" collaboration. Professor Jim Briggs picks up the story:

When I joined the department as a student in 1977, there was already a tradition of keenly-contested staff-student matches, usually held in the last week of the summer term. I was the treasurer of the student cricket club so a bit disappointed not to be selected for the 1978 game (which I think I umpired instead). However, I played in every other one until I was injured in 1995, which was also the year I left the department (with BA and DPhil degrees and 12 years' experience as a lecturer).

In 1983, there was sufficient staff interest around the University to create a league that would enable us to keep playing after the end of term. The department's team was known as the "PDP XI". For those under the age of 60, the joke was that PDP-11 was then a model of mini-computer manufactured by the Digital Equipment Corporation (DEC) that all undergraduates got to program in machine code.

The PDP XI was triumphant in winning the inaugural staff league, but sadly didn't win it again until 2002 and I can't find evidence of victories since then. There is a history of the league up to 2015.

Stalwarts of the team during the 1980s and early 1990s were Andy Wellings and Alan Burns from the academic side, and John Galloway, Ken Finch, John Marsden and Chris Gowland from the Computing Service operations team. Ian Wand (and for a time his son, Paul) played in the early years. The team was made up of academic, research and technical staff, PhD students and (later) an increasing number of "ringers" from other departments that weren't big enough to form their own team.

Our bitterest rivals in the league (and believe me, at times it was bitter! J) was the Chemistry Department side, known as the "ROC Norman XI" after their founding head of department. The rivalry culminated in the infamous staff-league game of 1st July 1987. Here is a full description of the game (albeit from the Chemistry standpoint), but suffice to say that Chemistry needed 6 to win off the last ball of the match, with me bowling. Their batsman hit the ball high over the boundary for what was thought to be the winning runs, only for us to point out that the ball had clipped a branch of the oak tree and that local rules meant it was only 4. We had won by 1 run! To say they were not happy was an understatement.

However, the Department's links with cricket didn't end on the boundary of social cricket. For over 12 years we were linked with Yorkshire County Cricket Club. In 1981, Yorkshire's ground at Headingley in Leeds had become the first in the country to install an electronic scoreboard - its first test match was the famous "Botham's Ashes" one that season. In 1983, they approached me to see whether I could help them solve two problems: (i) the scoring system that drove the scoreboard wasn't very good; and (ii) they didn't have anyone to operate it. For the 1983 season, a rota of us from the PDP XI operated the existing system at each match – soon finding out what its problems were!

For the 1984 season, we introduced new scoring software (that I'd designed and implemented in my spare time) on new hardware ("Apricot" computers – whatever happened to them?!). This proved to be so successful that it was used (with a couple of upgrades of computer to run it on) until 1998, when the existing scoreboard was demolished and replaced by higher-resolution technology.

One of my proudest achievements as a computer scientist is that my software ran for 15 years without a bug ever showing the wrong score on the board. Occasionally, operator error would lead to the wrong score being displayed, but even that was usually only for a very brief period. The system had 3 layers of error recovery mechanism, including as a first layer an "undo" mechanism created by generating reversible program code (which led to my paper in "Software – Practice and Experience"). In 1989, the same software was run by all (then) 17 first class counties to provide a "dial a score" service – a premium-rate phone line that gave the up-to-date score using computer-generated speech (I wasn't responsible for that part of the system). Sadly, not enough people dialled the number to make the service economic to run and it was closed at the end of the season.

Inevitably, the interest and availability of people in the department to operate the scoreboard declined over the years, and I eventually recruited a group of Leeds-based operators to take over that aspect of it. There was however one remaining operator from York (ironically a chemist!) when I stopped being involved.

Jim Briggs is Professor of Computer Science at the University of Portsmouth. He left York in 1995 and is now Professor of Informatics, Director of the Centre for Healthcare Modelling and Informatics, and Associate Dean (Research) for the Faculty of Technology. You can read more about his recent work on predicting risk for hospital patients at https://www.port.ac.uk/news-events-and-blogs/features/a-life-saving-solution-in-the-palm-of-your-hand and https://www.port.ac.uk/news-events-and-blogs/features/life-saving-news.