Celebrating 25 years service within the Department of Computer Science

Congratulations to David Hull, Project Manager and Dr Steve King, who both celebrated 25 years service within the Department of Computer Science on 1 October 2020. 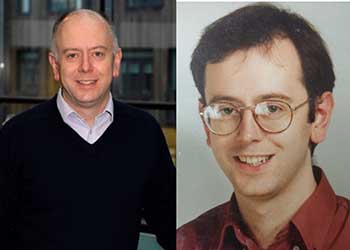 David joined the department in October 1995, in a role providing administrative and technical support to the then fledgling MSc in Safety Critical Systems Engineering. He had been interviewed by Peter Burgess, Jonathan Moffett and the late Ian Wand, and Jonathan became his line manager. He was initially based on the top floor of Wentworth College, with Jonathan, John Clark, Steve King and Andy Vickers, until the whole department moved to what is now the Harry Fairhurst building, in 1997. In 2000 he was appointed as Laboratory Manager, replacing Peter Burgess when he retired, a varied role which saw him play an active part in the design of the current CS building, and planning and overseeing the Department's move in 2010. A restructure saw him become Technical Manager in 2011, before moving into his current role of Project Manager in 2019.

David has made many friends in CS and the wider university over the years, and says that the pleasure of working with colleagues old and new, coupled with the diversity of work in each of his roles, is what makes working in the Department special. He is particularly enjoying leading on and delivering various service improvement projects in his current position. David is proud to join the exclusive club of those with more than 25 years' service in the department.

Steve started out as a lecturer in CS in 1995, working initially on the Masters programmes in Safety Critical Systems Engineering and Software Engineering. Currently a Reader (Teaching and Scholarship), he has taught at all levels from UG1 to MSc, and has held several departmental admin roles, including Board of Studies Chair, and Deputy Head of Department (Teaching), though he has managed to avoid Admissions Tutor! At University level, he was Chair of the Standing Committee on Assessment from 2011-8, Academic Lead for the International Pathway College (2014-5), and is currently Associate Dean for Teaching, Learning and Students in the Science Faculty (since 2018).

When he joined Computer Science the department was housed in 11 different buildings, mostly around what is now Market Square, but the SCSE team were housed in Wentworth, almost as far away as possible on the campus.

So, in 25 years, what has changed? The most obvious thing is that the department has grown much bigger, both in terms of student numbers, and in terms of staff numbers, academic and PSS. Some things have remained unchanged though, such as the concern for teaching as a fundamental part of the department's work, and the importance of top-class research as the primary metric for the Department's reputation, both in the University and externally.

And what does he miss? Chris who provided tea and coffee in the staff common room (with delicious cakes on occasion) and kept a maternal eye on staff and PhD students alike. And the departmental cricket team, the PDP XI, with glory days of winning the staff league in 2002. And the times when you could hope to know, by sight at least, all the students in a first year class. Those were the days.